THERE’S POWER IN YOU

The StandPoint Church > Devotionals > THERE’S POWER IN YOU

THERE’S POWER IN YOU 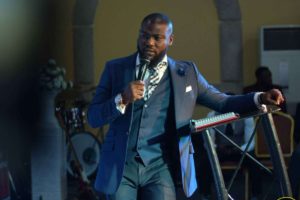 KEY SCRIPTURE/MEMORY VERSE: Ephesians 1:19-20(NKJV)
and what is the exceeding greatness of His power toward us who believe, according to the working of His mighty power which He worked in Christ when He raised Him from the dead and seated Him at His right hand in the heavenly places,

The believer’s life is a life of identification.
When a man puts faith in Jesus, he comes to the experience of His death, burial and resurrection and everything that it stands to represent.
Yesterday, we were reminded that we are witnesses of the cross because even though we were not there physically, the one who was there now lives inside of us.
Praise God!

Scripture says in the latter part of 1 John 4:4 that “…greater is He that is in you than he that is in the world.”
What this means is that sickness cannot stand you beause there is the zenith of the expression of the power of God in you.
Poverty, failure, you name them, are not as strong as the resurrection power in you.

Declare to yourself- I have resurrection power in me!

Romans 1:4 says Jesus was declared to be the son of God with power by the resurrection.
Look, the reason why our gospel is the most sure or authentic is because no other person who claims to be the way to life, to eternal life has risen from the dead.
Mohammed died but he wasn’t raised back to life. Buddhaism or any other religion has no record of whatever supreme being they worship that died and resurrected except our Jesus by the power of God!
Which is a proof to you that the zenith of God’s power is expressed in the resurrection of Jesus.

Have you ever stopped to think about the fact that it took power to raise Jesus from the dead?
It took power! It was the demonstration of the power of God that brought Him from death, three days in hell and raised Him to life again.
If it wasn’t the power of God, He may have been held back but having fulfilled the requirements of justice, there was no reason to be held back and so He resurrected with power. Hallelujah!

Friends, everything that God demonstrated with the cross, He did it to show you that you can be an expression of them.
You are a carrier of that power. Express!

REFLECTION
Do I live knowing that there is resurrection power in me?

DECLARATION
-I believe in the good news of the gospel. That in the giving of Jesus, I am now a beneficiary of God’s grace.
-The gospel is the grace of God. I am thankful for the grace of God.
-I have come into a progressive revelation of all that the grace of God reveals.
-The cross is the proof of God’s love for me.
-The cross is the highest demonstration of God’s power.
-I have resurrection power in me.
-I am a witness of the cross, therefore nothing can stand against me because the zenith of the power of God is in me.
-Nothing, no sickness, no poverty or failure is stronger than the resurrection power within me.
-The resurrection of Jesus is proof that I can be an expression of that same power.
Hallelujah!

Listen to 5.0 Shades Of Grace >> Dr. Phil by The StandPoint Church on #SoundCloud